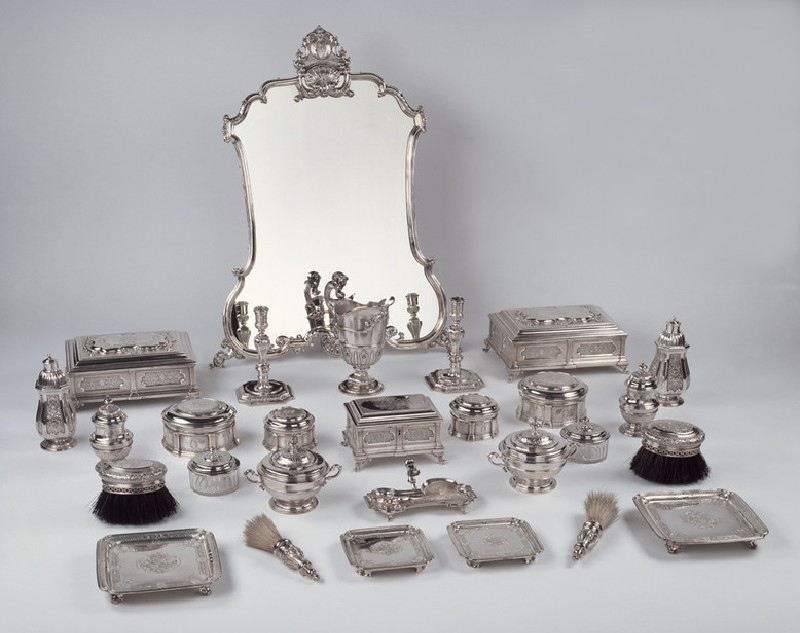 During the latter part of the seventeenth century and the early eighteenth century the silver dressing table or toilet service was one of the most fashionable luxury accessories of the aristocracy. (The word 'toilet' derives from the French name for costly fabric - la toile - that would have been attached to the mirror and drawn across the dressing table to cover the service.) Such services were extremely costly and gradually grew in size as a wider range of cosmetics became available. However, by the mid-eighteenth century it was increasingly regarded as an affectation and can be seen featured in Hogarth's satirical series of engravings of the 1740s, Marriage a la Mode. George Treby was one of de Lamerie's most important and well-documented patrons. The Treby service, comprising 29 pieces, is a unique survival because of its quality, condition and documentation. In terms of design, it is conservative. Most of its parts can be exactly paralleled in England by three other services: the first of 1700 by Pierre Platel; the second of 1701 and 1714 by Platel and Claussen at Welbeck Abbey and a third closely related service of 1725 by David Willaume at the Royal Ontario Museum. One feature that does set this group apart from their French prototypes are the highly distinctive panels of cast low-relief ornament on the sides of the boxes and water bottles.